Guardians of our civil liberties sounded their alarms when, in 2001, it was revealed that criminals with outstanding warrants who had chosen to attend Super Bowl XXXV had been detained after being identified by facial recognition software installed at the Tampa stadium hosting the event. Fears over unconstitutional intrusions invited subsequent reporting on the growing use of facial recognition in crime deterrence and denial of service in places like the casinos in Las Vegas and Atlantic City.

First marketed in 1996, facial recognition software immediately demonstrated its utility by identifying eight baccarat cheats after three days of use at Trump Marina, and it continues to be a valuable tool to protect businesses and the public. But are sports and gambling venues serving as the real world proving ground for the aspirations of the TSA, the NSA, the CIA, and the FBI? Run by private enterprises attended by willing participants, it’s a business security application. Does it raise different questions if the application is law enforcement in a public place, or in a private venue? 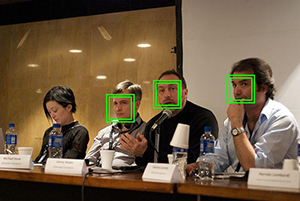 There are several methods of facial recognition in use now, with more sophisticated programs in development for law enforcement and commercial use. For example, current Principal-Component Analysis (PCA) and Linear-Discriminant Analysis (LDA) technologies are useful in controlled environments – comparing mug shots and other “front facing” photos for skin and hair color, et cetera.  But Elastic Bunch Graph Matching (EBGM) creates 3D models from two-dimensional images, mapping “fiducial” anchor points to a latitude and longitude grid of a subject’s head, from as few as a half dozen anchor points to as many as 40,000. This can account and correct for poor lighting and odd angles, and even partial images. EBGM can build a model from as few as 80 pixels between a subject’s eyes, and as few as two images to create a 3D reconstruction.

The FBI is currently upgrading its facial recognition system with the help of Lockheed as part of its Next Generation Identification (NGI) program.  Nonetheless, the FBI’s facial recognition reliability is still said to hover around 85%, and their database is predicted to reach 52 million by next year, whereas Facebook already has a face image bank of around 250 billion. Facebook makes face tagging suggestions for you to confirm, which depends largely on reported human recognition. But their DeepFace software project has demonstrated accurate recognition of individual faces 97.25% of the time, just slightly behind human accuracy at 97.53%. The implication is that commercial and social media can, for now, identify your face more reliably than the FBI, but maybe not as accurately as your Mom.

In use now by some law enforcement agencies, MORIS (Mobile Offender Recognition and Information System) is a mobile app for iOS and Android devices that requires portable add-on equipment for face or iris scans, as well as a metal panel for fingerprints in the field, making it easier to positively identify accident victims or people without documents. Fingerprints can and may be used against you, but fingerprint identification can also be used to protect access to your mobile phone and other devices. And there are other positive uses in development for facial recognition and other biometrics. For instance, facial recognition software has recently been used in combination with X-rays to identify and locate cancer, possibly leading to earlier detection and accurately focused treatment.

As we described in our comparisons of the Samsung Galaxy S5 and the Apple iPhone 5S (Choosing Worlds – Part One, May 31, 2014) fingerprint recognition is used by both as the preferred method to access your mobile phone. At the time, we reported that only the fingerprint scanner of the Galaxy S5 could be put to other uses such as verifying PayPal transactions or being accessed by third party apps.  But this summer Apple reported its Touch ID fingerprint recognition technology will be opened to third party developers sometime this fall with the release of iOS 8. In the meantime, a few Galaxy S5 fingerprint identifying apps are starting to appear, such as “LastPass”, a password manager available on Google Play. Others are sure to follow as the value of fingerprint identification is recognized and trusted by more and more users. A password manager for the iOS platform, “1Password”, as well as financial apps like “Mint” will be utilizing the Touch ID technology, though in conjunction with traditional passwords for now, as user confidence grows.

We’re told if we’re doing nothing wrong, we have nothing to worry about.You might not be worried about the FBI, or a greater threat like your Mom, but what about that stranger eyeing you on the train? A new app called “NameTag” has been developed for Google Glass, iOS, and Android, that allows the user to snap a photo of you, and immediately link your facially recognized identity to your social network pages and relationship status, allowing them to make an informed decision on whether to ask you out, leave you alone, or perhaps follow you home. Here we try to figure out a clever reference to The Land of the Free, and the Home of the Brave.

But it’s not our purpose to present biometrics as a source of gloom and paranoia. We’ll soon follow up with an exploration of Guided Discovery, and apps being developed for people who want to be seen and found, accurately identified, and directed to other people and places they might want to discover. You may not be able to hide at the Super Bowl, but you can decide to participate in the new world of biometric recognition, personal location, and offers tied to your stated preferences, and use the give and take of information to your advantage, in a voluntary way and at the time and place of your choosing.